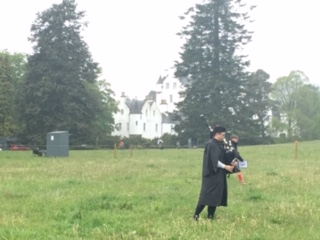 We checked out two Highland games, one in Blackfort and the other at Blair Castle. Manly men in kilts doing manly things like throwing cabers and hammers, lots of bagpipers and beautiful dancing by ladies in plaid.

We stayed at Cull-An-Daraich Guesthouse Owned by Rachel Knight and her husband. The guest house is an old poor farm which was converted to a really nice bed and breakfast. Great wheelchair access, plenty of grab bars in bathroom, roll in shower, nice bath bench, plenty of space around beds and beds at level easy to transfer. Good parking too.

We made sure to go by the Falkirk wheel which is really an incredible engineering feat. It raises canal boats up 37 m instead of using the old lock system that has numerous locks that took eight hours instead of the one and a half hour that the Falkirk wheel takes. It works on Archimedes principle of water displacement. We rode the canal boat through the Falkirk wheel and learned about the canal system that goes from sea to sea across Scotland and then another one that goes from the mines to Edinburgh.  The north-south and the east-west canals connect via the Falkirk wheel. Scotland renovated the canals about 20 years ago which has revamped a lot of economy in the area plus provided the added bonus of tourism. Very cool.

Nearby are the Kelpies which are giant sculptures of horse heads. Clydesdales were used to pull canal boats across Scotland and the Kelpies are in honor of those Clydesdales.

We came back to Edinburgh ready to catch our flights home. We stayed at the Brooks hotel which has terrible wheelchair access in the bathroom. Zero grab bars around the toilet and zero grab bars in the shower. The bath bench is a plastic thing I hope will not collapse!  The rest of the hotel room is great so I will make recommendations to them. It would not take much to make these desperately needed accessibility improvements. 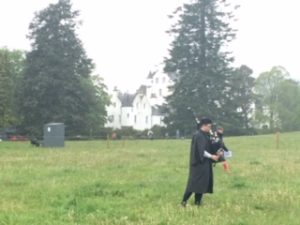 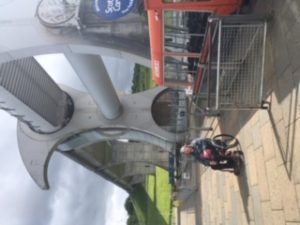 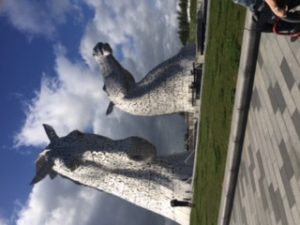