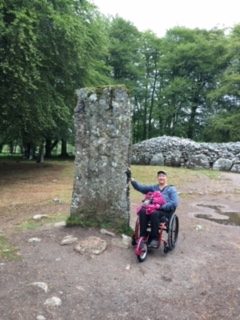 Our first sight was visiting Clava Cairns. It’s about 4000 years old and are piles of stones that or memorials/burial areas from millennia ago. It was doable in a wheelchair even when there were mud puddles. Then we went to Culloden Battlefield and Museum. This was very nicely wheelchair accessible. I really liked the audio tour and the battlefield itself was really interesting. I did about a third of it in my manual chair and freewheel then came back and transferred into a mobility scooter which was loaned out for free. I did the rest in that so I was able to see the entire thing pretty easily. Many long packed dirt trails. Many Stone Memorial for clans of Highlanders that fought the battle and just a lot of interesting historical information. There was a ramp that took me to a viewing platform to get a great view of the overall battlefield.

We wandered around the streets of Inverness and later went to Fort George. Fort George is huge. I wheeled across the drawbridge over what used to be the moat and through a big open field with housing on the opposite side. The fort has a few museums including the Highlander museum as part of the giant fort. It was built about 20 years after the battle of Culloden.

Our second day we went to the oldest church in Inverness (which by the way means “mouth of Ness” as in mouth of the Ness river that flows from Loch Ness to the sea). After Culloden battle, the prisoners were kept in the tower of that church and then later executed in the adjacent cemetery. We were able to go inside the church as well.

We stayed at Aldross Glencairns hotel. Room is pretty good but the roll in shower has extra little doors that are cumbersome for wheelchairs. They do keep the water from getting all over the floor thuough. I think it’s a pretty good room altogether. 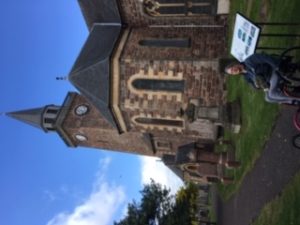 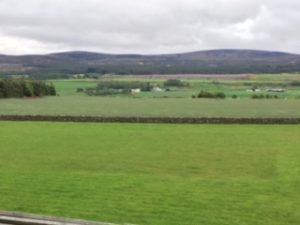 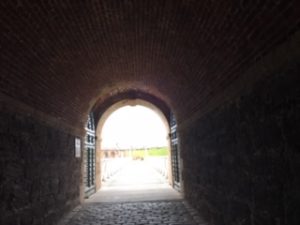